skip to main | skip to sidebar

So I was sitting on my couch watching the greatest show on earth... LOST!!! And I got to thinking.. "Hmm.. I see some very close similarities to another T.V. show I used to watch" and so 'We are all LOST' was born. 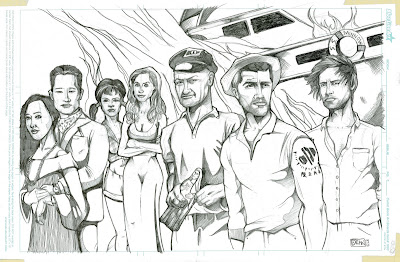 Done in graphite of 11"X 17" Bristol - A mix of LOST / Gilligan's Island-The Minnow in the back ground reflecting Oceanic 815, Ginger and Mary-Ann replaced by Kate and Juliette... Sun and Jin as Thurston and Lovey...Sawyer as The Professor and Jack and John Locke as Gilligan and the Skipper. 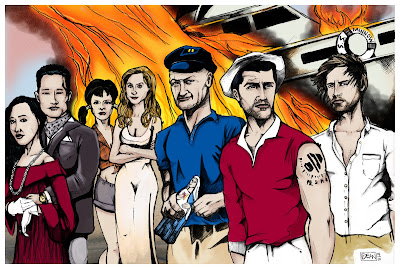 This is a color version of the drawing. I colored it in Photoshop and submitted it to http://www.threadless.com/submission/268474/We_are_all_LOST
vote for my drawing and if enough people do they will print it on a t-shirt!!!
So go vote NOW!!!

If the end of the show they run across the Minnow sitting in a Lagoon.... just know I called it.
Posted by DEAN at 12:23 PM

DEAN
An artist trying to make it in the world